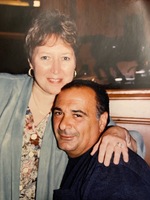 Frances Ann (Hammond) Skovera Peluso was called home to the eternal love of God on Friday, January 22, 2021 after a long battle with Parkinson’s Disease.

Fran was born to Edward and Theresa (Gostgowski) Hammond on May 14, 1948 in Philadelphia, Pennsylvania. She graduated from St. Hubert’s High School in 1966. Although she would permanently move away not long thereafter, she remained a Philly girl at heart for her entire life. Fran raised her family in New York, initially in Brooklyn. When she became the matriarch of a larger, blended family, she moved to Bayside, Queens, and in recent years she retired to Somers, NY.

Education was central to Fran’s life. Her first job out of high school was as a third grade teacher where we believe her penmanship was perfected. She began studying at Brooklyn College as an adult, and the experience transformed her life through new ideas, new friendships and the opportunity to excel at intellectual pursuits. Fran thrived at school, was awarded a scholarship and proudly became the first in her family to earn a college degree in School Psychology. Fran continued her education and also earned her Master’s of Science in Special Education, while caring for her family and giving birth to twins. Knowing its power, Fran sought to make education her life’s work, and she embarked on a career aimed at changing the world, one child at a time. Fran was a staunch advocate for early intervention for children and throughout the course of her work as a psychologist at SUNY Downstate and later at the Interdisciplinary Center for Child Development, Fran touched the hearts and lives of countless children and their families.

To know Fran was to know her deep devotion to God. Her faith was a continual source of comfort and joy. She steadfastly believed in the power of prayer, and was known to distribute pamphlets to both friends and to strangers, to instruct them how to pray the Divine Mercies. Her absolutely certainty that her life would continue long beyond her body, and that she would be reunited with her loved ones that had gone before her, meant that she passed without fear.

Fran suffered from several serious illnesses over the last years of her life, which she faced with courage and strength. While her decline left her unable to enjoy life to its full extent as time went on, the spark never left her eyes, nor did the love leave her heart. We know that Fran would hope to be remembered as most people knew her, as a vibrant, smart, kind, funny, and generous person, someone who was hard-working, made instant connections with babies, who loved to dance, had an infectious laugh and overflowed with pride for her family.

Fran was predeceased by her parents and by her sister, Theresa Ludlum. She is survived by her beloved husband, Vinny Peluso, her adoring children by birth and marriage, MaryFran Mitrano (Kevin), Alicia Skovera (Heather), Theresa Skovera (Bruna), Elizabeth Skovera (Erin), Stephanie Lorusso (Chris), and Vincent Peluso (Lauren), as well as her ten cherished grandchildren. She leaves behind her dear siblings, Edward Hammond (Donna), Donna Pasquarella (Val), Ron Hammond (Reenie), her precious nieces, nephews, and cousins, and many treasured friends.

For those who wish to honor Fran through causes meaningful to her, donations can be made to.:
The Association to Benefit Children (https://www.a-b-c.org/) or
The Parkinson’s Foundation (https://www.parkinson.org/)