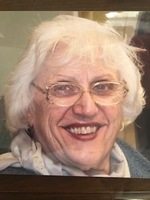 Marion Ruddy, a lifelong Pleasantville resident, died peacefully of natural causes on November 19, 2021. Marion was born January 3, 1937 in the house which her father built in Pleasantville. Her parents, Placido and Catherine Cundari immigrated to America around 1920. Marion was the youngest of four children; her older siblings, Rose, Angelina, and Charles all pre-deceased her.
Marion graduated from Pleasantville High School in 1954 and was most proud of being captain of the Cheerleading team during her time in school. Upon graduation, Marion began work at AT&T in White Plains in the secretarial pool. There she met her future husband, Francis (“Rex”) Ruddy from New York City. The couple married in 1957. After living briefly in White Plains, the couple moved back to the family home in Pleasantville.
It was there that Marion, now a full-time homemaker, would tell you that her greatest accomplishment was being a mom and raising her two sons, Michael and Thomas. Marion watched and agonized over her two sons playing football at Westlake High School and lived through all the injuries and doctor visits. She epitomized being a “football mom”.
Her husband, Rex, died at the young age of 59 in 1992. Marion then decided to embark on the next phase of her life and re-entered the work force. She worked at Holy Innocents Church in Pleasantville as a receptionist and later as an administrative assistant at JCCA (Jewish Child Care Association), a residential treatment facility for troubled youth. Marion retired from JCCA around 2005.
Up until her last days, Marion was an avid and passionate Yankee fan. Frugal beyond compare, that didn’t stop her from purchasing the cable sports package so she could watch EVERY Yankee game. She was very opinionated on which players she liked and didn’t like and would make her opinions known to anybody who would listen, especially her granddaughter, another avid Yankee fan.
Marion loved being kept apprised of all the academic, athletic and theatrical developments of her six grandchildren and six great-grandchildren. Her cheerleading roots were passed down to two granddaughters and now a great-granddaughter. She loved getting pictures on her cell phone so she could share with friends.
Marion is survived by her two sons, Michael and Thomas, their respective spouses, Jennifer and Patricia, six grandchildren (in order of age) Caitlin, Christian, James, Callista, Elizabeth and Lucas and six great-grandchildren (in order of age) Madison, Sophia, Mason, Thomas, McKinley, and Luna
Marion’s life will be celebrated at Beecher-Flooks Funeral Home in Pleasantville on December 1, 2-4PM and 7-9PM a mass will be celebrated at Holy Innocents Church on December 2, at 10:00AM

”In lieu of flowers, donations can be made in Marion’s name to “Catholic Charities – Archdiocese of New York”